It's another card review. The Red-Eyes B. Dragon..... "The Red-Eyes Black Dragon." It is quite possibly the worst card, or weakest so to say, cover card released... and it probably still holds that reputation, at least for the first four Starter Decks released at the beginning of the game. Red-Eyes B. Dragon is a favorite to many fans of Yu-gi-oh!, especially for people whose favorite character is Joey, the guy that uses this card. I what I like about the Red-Eyes B. Dragon is that its theme is all about potential, whereas the theme for the Blue-Eyes White Dragon is all about power. I remember the first episode that the Red-Eyes B. Dragon first appeared, used by the character Rex Raptor. (What is a "Dino Duelist" doing using a Dragon-Type monster?) Immediately I was amazed when they pointed out that the Red-Eyes was meant to rival the Blue-Eyes, but even before they said that I immediately caught on with their contrasting color scheme. It surely was clever. What carries on this them both in the show and the actual card game is that Joey's and Kaiba's personality conflict as they reflect the nature of their cards. Joey has the potential to become a great duelist, and Kaiba already a great duelist. Interestingly enough, the Red-Eyes B. Dragon is much weaker than the Blue-Eyes White Dragon so it really parallels to the themes of these two dragons.

So let's examine this card of an underdog. Red-Eyes B. Dragon is a, DARK Attributed, Level 7 Dragon-Type Normal Monster with 2400ATK and 2000DEF. Initially, this card already possesses the same draw back as the Dark Magician; it is a Normal Monster used mainly as a favorite, requiring 2 Tributes to be Normal Summoned. In comparison with most cards this card can easily be beat out in terms of attack strength. There are even Normal Monsters that can defeat this card that only require 1 Tribute, and some of the cards that can match this dragon's strength may also require just 1 Tribute! When comparing the cover cards for Starter Deck Kaiba, Starter Deck Yugi, and Starter Deck Joey, the Red-Eyes B. Dragon is beat out by it's main rival by 600ATK Points and by the Dark Magician by 100ATK Points. Like Blue-Eyes White Dragon and Dark Magician, this monster also has alternative artworks. To build upon the theme of being a manifestation of great potential, there are other "Red-Eyes" dragon cards available. 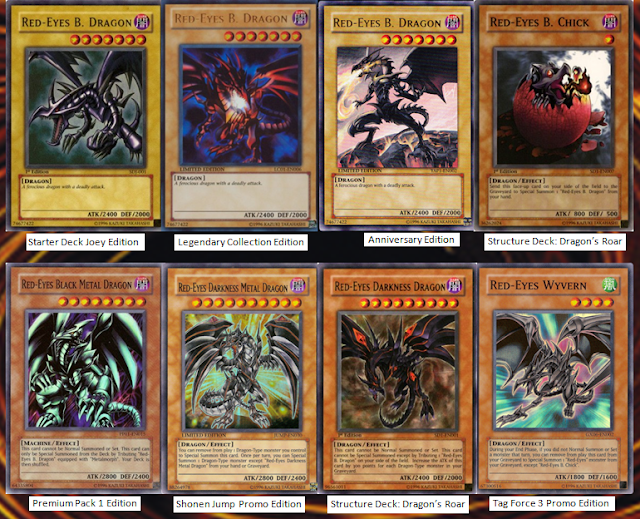